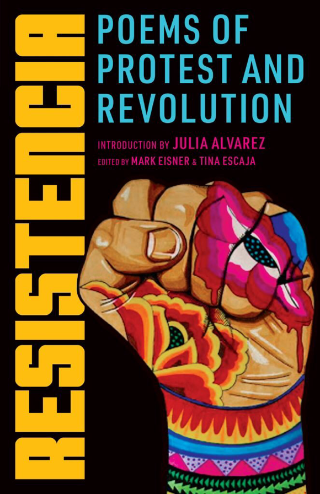 Resistencia: Poems of Protest and Revolution

With a powerful and poignant introduction from Julia Alvarez, Resistencia: Poems of Protest and Revolution is an extraordinary collection, rooted in a strong tradition of protest poetry and voiced by icons of the movement and some of the most exciting writers today. The poets of Resistencia explore feminist, queer, Indigenous, and ecological themes alongside historically prominent protests against imperialism, dictatorships, and economic inequality. Within this momentous collection, poets representing every Latin American country grapple with identity, place, and belonging, resisting easy definitions to render a nuanced and complex portrait of language in rebellion.

Included in English translation alongside their original language, the fifty-four poems in Resistencia are a testament to the art of translation as much as the act of resistance. An all-star team of translators, including former U.S. Poet Laureate Juan Felipe Herrera along with young, emerging talent, have made many of the poems available for the first time to an English-speaking audience. Urgent, timely, and absolutely essential, these poems inspire us all to embrace our most fearless selves and unite against all forms of tyranny and oppression.

Praise for Resistencia: Poems of Protest and Revolution

"A groundbreaking collection of works by over 50 poets, Resistencia is alive with bravery, feminism, strength, agency, protest, power and hope."
– Ms. Magazine

"A stunning collection of revelations and witness...Indispensable."
– Luis Alberto Urrea

"Exactly the kind of book this world needs more of....This is a must-read."
— Bookmarks, Most Anticipated Poetry Collections for Fall 2020

"Resistencia is as uplifting as choral music and as devastating as the news."
– San Francisco Chronicle

"Resistencia appears with arms wide open, ready to lend its voices in solidarity to those of its US counterparts, amplifying what Álvarez so aptly described as a ‘chorus of love and hope.’…The collection not only challenges conventional representations of the Americas, it grants access to anyone who identifies with its revolutionary spirit. Resistencia thus becomes an invitation to belong to something bigger, to join forces with one’s neighbors, and to recognize a greater universal truth about the human condition.”
– Kenyon Review

"The poems in Resistencia do not soothe but shake us awake, and they call on us to do what they have done: to witness, to listen, to not only speak but sing."
– Maggie Smith

"A poetic manual for resistance has arrived....Resistencia's dream team of translators has spectacularly rendered this polyglot volume into a vibrant whole while also making it approachable for newcomers to Latin American literature. As a poetic primer in the language and tradition of protest, it is essential."
– Seven Days